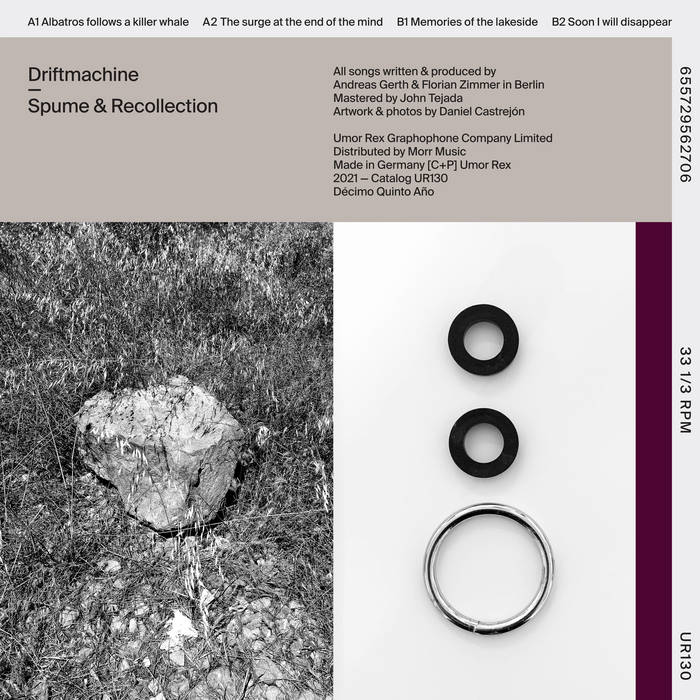 Punctual like a Swiss watch, Driftmachine presents a new album, that once again astounds and delights. We know their trademark: solid mechanical percussions, forceful bass and melodies systematically built around circular patterns. "Spume & Recollection" is the sixth Umor Rex album by the Berlin based duo, and what better way to celebrate the label's 15th anniversary than with a new album from the masters of labyrinthine cables and patches, who consider the record also as a look back on their common musical grounds. Regarding "Nocturnes" (UR 2014), their debut album, we described their sound as precise and symmetrical, identical concrete blocks mounted and articulated in a random order. Their already obsessive style continued to evolve with their third album, "Colliding Contours" (UR 2016), now pushing further into abstract dub, ultra-tense grooves, and even more kinetic loops, moving further away from conventional musical structures. Between these two albums they released the remarkable "Eis Heauton" (UR 2015), a kind of hypnotic experiment informed by shadowy atmospheres, chance, and an intuitive dialogue with their musical machines, a unique situation in which they acted as bemused observers in hunt for epiphanies, resulting in an exquisite amalgamation of lucid dream-logic and mechanical precision. A one-of-a-kind soundtrack for minute and wordless scenes unfolding in pitch-black back alleys and hidden, alchemical basements. A similar map was explored with "Shunter" (UR 2018), a superb secret meeting between avant-garde phantasmagoria and concrete experimentation. "Radiations" (UR 2017) offered B-sides and bonus tracks, in addition to collaborations with Shackleton and The Sight Below, a kind of preamble that united Driftmachine’s different expressions and leanings.

When Andreas Gerth and Florian Zimmer come up with new material, one listens with high expectation. Looking back on their discography, one could safely anticipate a high quality album, densely layered with their familiar leitmotifs. And yet, "Spume & Recollection" takes us by surprise and finds a new way to transfix. Fresh methods and ideas are introduced to their dynamics and formula. Yes, of course, you can still expect a healthy dose of kosmische, which is one of the dominant features in Driftmachine’s DNA; but this is now entwined with novel materials, semi-material patterns of alien code stretching over exhilaratingly tense and detailed grooves, clouds of gas shifting on top of deep dub architecture and blocking out the sun for prismatic effect. Even more of a surprise is the immediate, streamlined nature of these tracks, making Spume & Recollection their most accessible record and, perhaps, the most addictive (and this without sacrificing the essential mystery and strangeness at the core of Driftmachine’s sound).

We have previously described their work as post-industrial-dub; right now, we might just call it hypno-music for man and machine to dance and dream together. Spume & Recollection takes this concept as far as it can go without breaking, and finds some strange new feelings, and weirdly danceable grooves, to shed some light on this dark and dazzling ride.