by Dino Spiluttini and Nils Quak 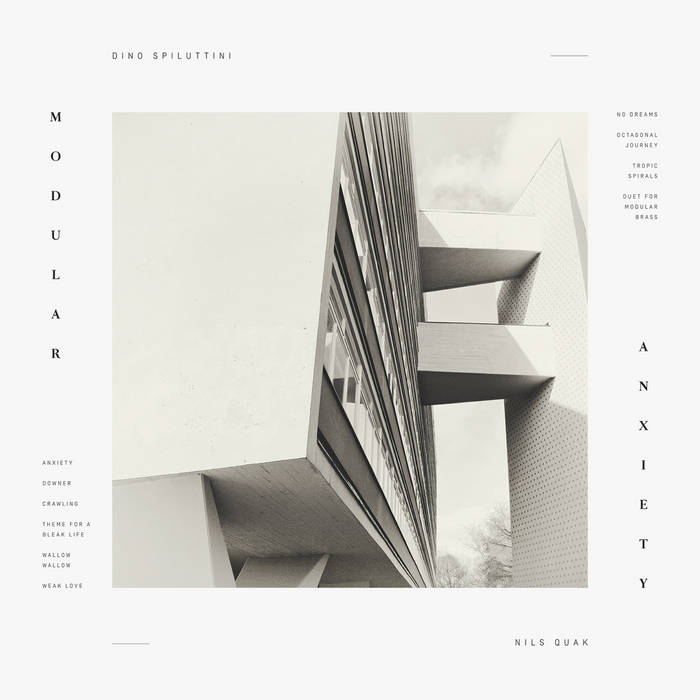 ≈
Modular Anxiety is a split LP comprised of 10 tracks that presents an audacious face in the land of ambient / drone synth music. One side belongs to Dino Spiluttini ( Home Normal, Beatismurder) and the other to Nils Quak (Nomadic Kids Republic, Sis Sic Tapes).
≈

Dino Spiluttini and Nils Quak - Modular Anxiety (LP / Umor Rex 2014)
It could be argued that for each common trait that binds them, there are twice as many differences that throw them apart. If the same words can be used to describe both sides (spatial, cathartic, acute, deep) one must also concede that they may not even belong to the same genre, even if the two of them do hum and drone profusely, glitch at intervals, and (apparently) constitute their sound from a warm analogue-digital palette.

But the differences in character cannot be ignored: Spiluttini’s work is relatively direct and specific, with soaring melodies, taut structures, high frequency grasslands, surprises and electronic nuances full of musical drama sense, while Quak’s – written entirely on a modular synthesizer – sound is somehow more obscure, with a slower sense of time, cooler colors, bubbling textures, piercing notes, a mood of brooding mystery and menace, atonal melodies and phrasings, and an all-around smoky vision and sensibility. So, the question arises: how come that such contrasting visions work so well together? Both sides are made of synthetic music that sometimes evokes distorted environments & landscapes, but that hardly accounts for the odd tonal unity and continuity that goes from the A-side (Dino Spiluttini) to the B side (Nils Quak). Yet, they’re both equally friendly to the ear and satisfying in their own way. When considered together, they share a tacit agreement, a subtle and eerie intuition that goes back and forth between them.