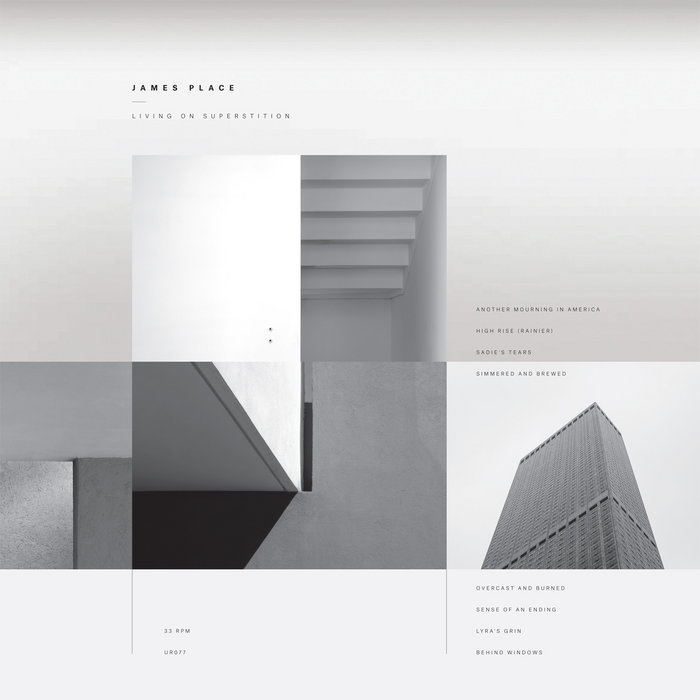 Max In The World

"Living on Superstition" is the debut LP from New York native Phil Tortoroli a.k.a. James Place. After his initial cassette release "An Entire Matchbook A Night" (Opal Tapes) in 2014, James Place returns with a harrowing, meditative record of candle-lit rhythms and frost-laden ambience. The album was composed using an intricate collection of analog equipment, including the TR-606, Casio SK-1, SP1200, and a multitude of vinyl and tape-based samples, and mastered by M. Geddes Gengras.

James Place has two points of reference: a palette of quiet, emotional sounds that reflects compositions from both electronic music’s early experiments as well as a more contemporary style of hauntological exploration. This blend offers a mirror with which to view the world through - it’s as if we’ve stepped into the long-forgotten attic. It is his second nexus of inspiration with which Living on Superstition does not bear an allusion to a defined era. Engaging in a bacchanal waltz with deeply-contemplative ambience, the album is peppered with an array of street recordings that create overlapping folds of sound out of everyday vignettes. Intonations of the aquatic environs of Panabrite and Robert Turman inform parts of the album, in addition to extended passages of primitive techno seemingly influenced by the early releases of Juan Mendez’s Silent Servant project.

Living on Superstition is ultimately a collection of midnight material recorded in a Manhattan high rise that, curiously, resembled a prison more so than an apartment. With the 13th floor actually marked as the 14th, an urgent disgust with the opulence of this rapidly gentrifying city is evident as a never-ending parade of brazenly destitute drunks and high-heeled clowns shriek with shallow delight from the streets below. If one listens closely, fragments of that insipid hedonism so common to today’s American dream can be heard seeping into the recordings of James Place throughout his waking dream of an album.