Let's Talk About The Weather 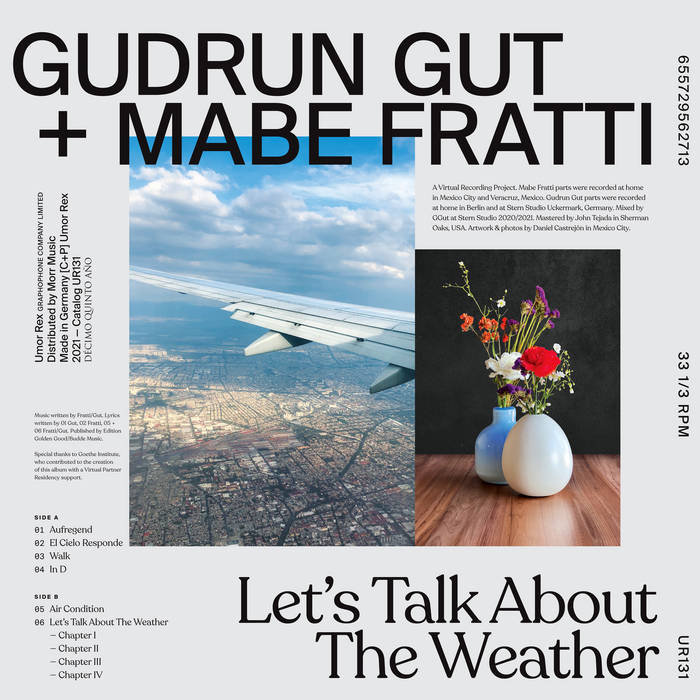 Gudrun Gut and Mabe Fratti have worked together on a powerful hybrid album, where taut rhythms fuse with haunted vocal melodies and spoken word, and field recordings meld with extended ambient pieces.

As part of Umor Rex’s 15th anniversary, we here present an album that builds a dialogue between two lands and two unique artists. Mexico is the origin and conceptual residence of our label, while Germany is where we produce and manufacture our records (Berlin functions as the center of distribution and logistics, thanks to our friends at Morr Music). The intertwining imaginations belong to German producer Gudrun Gut (Malaria!) —a notable figure of the subculture and the German music scene since the early 80s, and also a founder of Monika Enterprise and recipient of the ‘Listen to Berlin’ Award in 2019— and singer, multi-instrumentalist and composer Mabe Fratti (originally from Guatemala, now based in Mexico City). We knew about "Let's Talk About The Weather" from the beginning, and since the moment Gudrun and Mabe made us part of their project, our excitement could not be greater.

The process started with Gudrun and Mabe having long distance conversations, asking about their whereabouts and discussing the weather. This might seem rather commonplace, but it works as a key thematic component for the entire album. The weather as the new great unknown, perceived through the optics of everyday life. Sound files were methodically exchanged, with Mabe exploring words and vocals, and Gudrun working with field recordings taken from each city. In the end, this joint musical venture would provide a healing effect for both artists during life in quarantine.

"Aufregend", the opening track of the album, reflects upon a general lack of excitement in modern life. It wonders what the future might hold. Is it cold? Is it warm? Will it be the same? "Air Condition" is an eerie, dazzling collision of climates: the hazy warmth of Mexico City, the deep cold of Uckermark. The last track, which gives the album its name, is a long ambient piece composed of four parts: sound sculptures, field recordings of city life, news and weather forecasts, and private conversations about the climate. It's kind of a collaborative diary, obsessed with a single, all-encompassing subject.

Special thanks to Goethe Institute, who contributed to the creation of this album with a Virtual Partner Residency support.