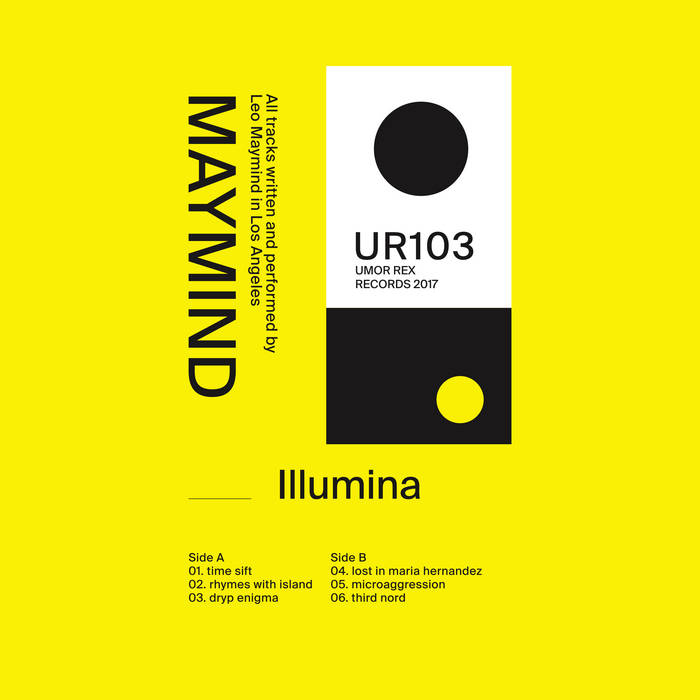 “By restricting myself, I feel like I'm connecting with a larger arc of producers throughout time,” explains Leo Maymind. “People who were crammed into a corner of their bedroom with headphones on while the rest of the world was out gallivanting.”

Following nearly a decade entrenched into the Brooklyn DIY scene, a move to Los Angeles signalled a change in approach for Maymind, limiting his gear to a small tabletop hardware setup, sometimes as little as a single drum machine and a rackmount effects unit. Illumina is Maymind’s first full length release since this change of location and approach, focusing in on the liminal and transitional moments within the musical spectrum. The limited timbres across Illumina shift and evolve before your ears, each track unfolding at its own pace. Sometimes they reach a resolution; other times simply fading off into the ether.

“I think the commodification of music and having streaming available at all times has made listeners very impatient,” says Maymind, “even when it comes to ambient or drone music.” Illumina battles against this, the deep buried rhythms consistently getting disrupted by stray new percussive notes, or the gently sketched melodies getting spliced overhead, mutating into new textures. Inspired in part by his own stuttering problem, this element of aleatory interruption informs Maymind’s adroitly crafted minimalism on Illumina. “I wanted to make music that mirrored life more closely,” says Maymind. “Things cutting off sharply—life is full of twists and turns.”

All tracks written and performed by Leo Maymind in Los Angeles. Mastered by Felix-Florian Tödtloff at Ætherweight in Berlin. Artwork by Daniel Castrejon.