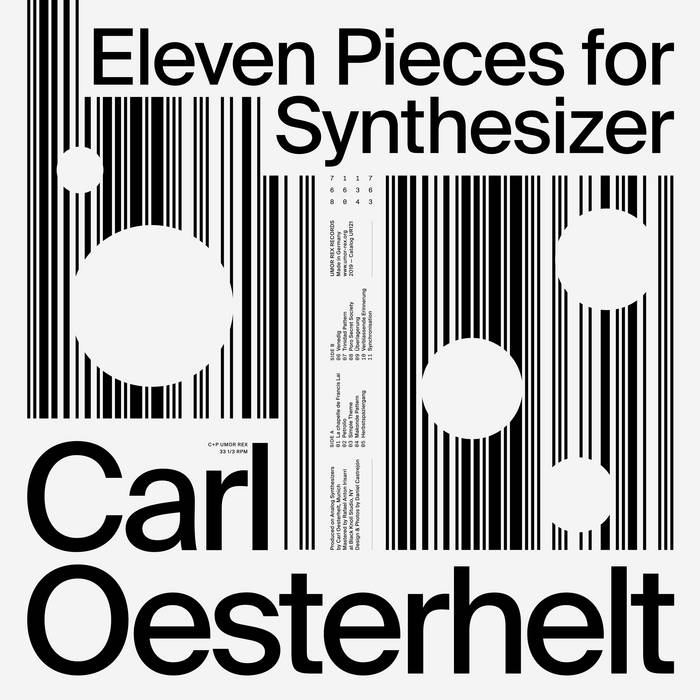 Umor Rex presents Eleven Pieces for Synthesizer, a collection of synth instrumentals by German composer Carl Oesterhelt. Oesterhelt has been recording a mixture of straddling kosmische and classical traditions for years on his own reel tape machine, overdubbing stacks of analogue gear to create a compelling body of work that brings fresh emotional depth and rhythmic experimentation to the syntax of the modern synthesizer.

Born in Munich in 1968, Carl Oesterhelt has worked in a variety of fields throughout a long and impressive career. His discography includes tenures with Neue Deutsche Welle legends FSK, intellectual disco outfit Merricks, and German legends The Notwist. His solo work has travelled even further and wider, taking in contemporary classical and chamber music, music for exhibitions and radio plays, not to mention notable collaborations with saxophonist Johannes Enders and legendary founding member of Faust, Hans Joachim Irmler.

Oesterhelt augments his own analogue arsenal with synthesizers borrowed from musician friends, resulting in almost fifteen different synthesizers –some in fruitful states of disrepair– which feature on the album. Opener “La chapelle de Francis Lai” pays tribute to the French film composer with a synthesized church organ procession, disintegrating kraut-funk-noir which emerges on “Poro Secret Society”. Then, eerie sound effects mash with minimal techno rhythms on “Makonde Pattern”, and –most surprisingly– Oesterhelt turns his keys into a sub-Saharan drum ceremony on “Trinidad Pattern”. The sheer range of Eleven Pieces for Synthesizer is an impressive achievement unto itself. Yet it is Oesterhelt’s instincts as a composer which make these (largely improvised) recordings so compelling. Tensions build and emotions stir throughout each piece with a proficiency perfected through his work for the stage.

Musically associates, and directly connected to a heritage of German electronics, Eleven Pieces for Synthesizer touches upon similar ground to the likes of Musik von Harmonia in its pulsations, Klaus Schulze’s sonically adventurous Cyborg, and Tangerine Dream at their earliest and most primitive. The hypnotic ritualism of early African field recordings, or the spiritual regality of European organ music also convey key reference points in the formulation of this collection. Oesterhelt’s compositions here have taken the musically primitive and the emotionally raw, and woven them into a rich synthetic soundworld all of his own.