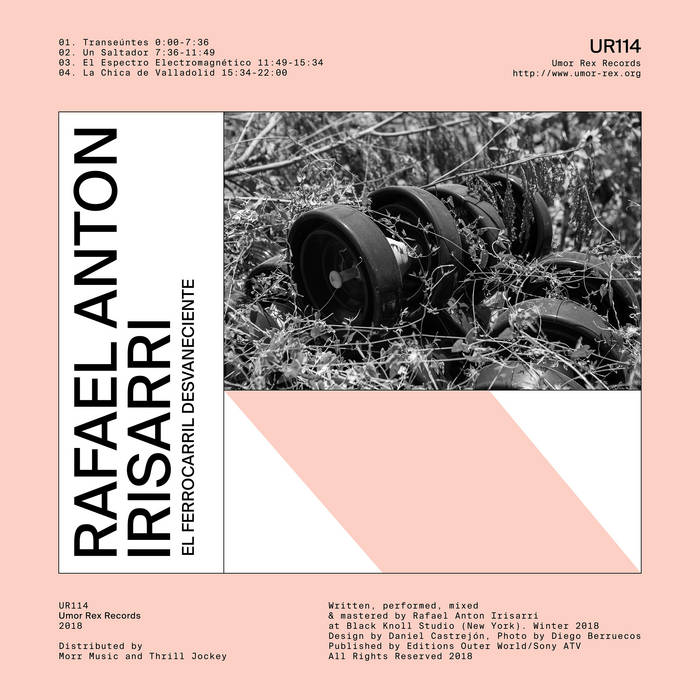 Past Inside the Present

Rafael Anton Irisarri continues his string of post-minimalist releases with his third for Umor Rex: El Ferrocarril Desvaneciente. While composed as an ode to an overnight train journey through Spain he took many years ago, the music picks up sonically where his previous album Sirimiri left off. Irisarri focuses on deploying sonic cycles throughout these four shorter pieces, basing much of this sweeping ambience around looped sounds and distant pulses. The sound is however kept in a state of forward motion and constant evolution, invoking the slowly rumbling night train that inspired it —not to mention its cargo of misfits and travelers. Irisarri’s skill, set as a manipulator of minimal sound input, is at full strength here, imbuing even shorter pieces such as “El Espectro Electromagnético,” with chasms slowly cresting drama. The phantasmagoria of “Un Saltador” was even composed as a departure for him, toying with synths and pedals in a “modular kind of way,” letting an experiment unfold with minimal interaction.

Inspired by musical storytellers such as Lee Hazelwood, Lou Reed, or Leonard Cohen, his music is transforming into something closer to narrative ––“storytelling without words,” as he puts it; “lyrical without lyrics”. His music hasn’t sounded as hopeful as it does on El Ferrocarril Desvaneciente for quite some time. The outward-looking despair of 2017’s The Shameless Yearsand the sorrowful introversion of Sirimiri have both been usurped by dreamy anecdotage. As with Sirimiri, it’s Irisarri’s intention that the El Ferrocarril Desvaneciente’s songs play out as a one long repetition, and thus we include again a bonus track comprising the full 22-minute loop.